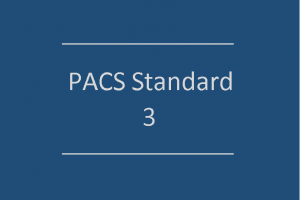 Note 1:  The term “procurement” is used below to comprise the process by which the Project Owner:

Note 2:  “Supplier” is defined broadly in the PACS Definitions to include “a supplier, contractor, consultant, funder, agent or other organisation which enters into a Project Contract with the Project Owner.”  Therefore, for example, contracts for the supply of equipment, goods and materials, for the undertaking of construction work, for the provision of consultancy services, or for the provision of finance, should all be subject to the procurement provisions in PACS Standard 3 and to the provisions of the other PACS Standards.

Note 3:  The term “Supplier” is used below to include a potential Supplier which is participating in or may participate in the procurement process, and which, if successful, will be awarded a Project Contract.

G1: What is the purpose of the requirements in PACS Standard 3?

The procurement process under PACS Standard 3 comprises the process by which the Project Owner:

The procurement process is highly vulnerable to corruption.  For example, a Supplier may pay a bribe to the Project Owner’s procurement managers to induce them to:

Therefore, PACS Standard 3 contains a series of anti-corruption measures which are designed to ensure an open, objective and competitive procurement process, with equal treatment of all Suppliers, and the opportunity for an aggrieved Supplier to challenge the outcome.

Paragraph 1 of this PACS Standard provides that the general anti-corruption measures in paragraphs 10 (conflict of interest), 11 (decisions), 12 (communication) and 13 (records) of PACS Standard 1 should apply to the procurement of all Project Contracts.   This means, for example, that:

Paragraph 2 of this PACS Standard provides that the Project Owner’s procurement managers should be employed in accordance with paragraph 9 (employment procedures) of PACS Standard 1.   This means, for example, that:

G4: Why are economic offsets not permitted (paragraph 5 of PACS Standard 3)?

‘Economic offsets’ refer to additional works, products or services which a project owner may require a supplier to provide but which are not related to the main subject matter of the procurement.  For example, a contractor building a power station may also be required to provide unrelated products, such as fire engines for the fire department.  There may be little commercial sense to this arrangement, as the fire engines would more effectively be procured under a separate competitive tender from fire engine manufacturers.  Such offset arrangements are a high corruption risk, as the true value of the offset is obscured without a proper competitive tender for the offset from the best placed suppliers, and this can provide a corruption opportunity for corrupt public officials and suppliers.

G5: What is the purpose of the illicit participant exclusion (paragraph 6 of PACS Standard 3)?

This provision is to protect against attempts to insert an organisation into the Project contractual structure as a vehicle to extract funds corruptly from the Project.  This could be done, for example, by a corrupt public official requiring a Supplier which has been properly selected under a procurement process to take on an illicit organisation as a joint venture partner or Sub-supplier in relation to the Project. This joint venture partner may be inactive but may be entitled to receive a percentage of the contract payments.  The Sub-supplier may not undertake any work or services, but may be paid as if it had.  These illicit organisations may be owned covertly by public officials or Project Owner managers, who may then ensure that the contract works or payments are improperly inflated so as to maximise their corrupt share.

Paragraph 6 therefore requires that no organisation or individual should participate in the Project or receive Project funds unless it has a genuine legitimate role in relation to the Project, is appropriately qualified to undertake such role, and (where appointed by the Project Owner) has been appointed in accordance with the procurement procedures.

The only exception permitted by PACS for acquisition from a single source without competition would be in the case of land acquisition under paragraph 6 of PACS Standard 2 where there is only one choice for the relevant land (e.g. where the route of a planned road goes over that land).

G7:  Can procurement procedures which comply with PACS Standard 3 be abused

There is a risk that, even though there are procedures in place effectively designed to comply with PACS Standard 3, a corrupt public official or manager may ensure that these procedures are by-passed.  This risk is limited in PACS by:

PS 1:   Anti-Corruption management of the project