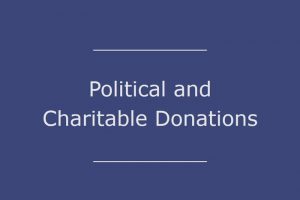 This section forms part of GIACC’s overall guidance on gifts, hospitality, entertainment, donations and other benefits (“Benefits”).  It gives specific guidance on dealing with the corruption risk in relation to political and charitable donations.

Separate sections deal with the corruption risk in relation to other categories of Benefit.  These other sections can be accessed on the following links:

Note that this guidance is in relation to political and charitable donations which are being given or received in a business context, and is not applicable to any such donations given entirely in a personal context.

(1) What are political and charitable donations?

Charitable donations are the giving or providing, directly or indirectly, of cash, venues, equipment, personnel time or other benefit to a charity, or to an individual or organisation who is nominated by or connected with a charity.

A donation could be considered to be a bribe if it is given or received with the intention of influencing someone to act improperly, or as a reward for having acted improperly.

(2) What types of donation are not likely to be regarded as corrupt?

Donations which are not likely to be regarded as corrupt include:

(3) What types of donation are more likely to be regarded as corrupt?

Donations which are more likely to be regarded as corrupt include:

(4) Guidelines for political and charitable donations

In many countries, political donations may be restricted by law.  For example:

It is difficult for an organisation to ban its personnel from making personal political donations out of their own funds, as this could be a restriction on their right to support a particular party or individual.  However, it is likely to be appropriate to prohibit personnel from making personal donations where these could be connected, or be seen to be connected, with a decision by a public sector body in relation to the organisation’s business.  Where personnel are permitted to make personal donations, the organisation should remain completely independent of such donations.  For example, it should never pay or repay the personnel’s donations, or co-ordinate or organise the personnel’s donations.

The organisation may prefer not to implement a total prohibition of political and/or charitable donations.  It may instead implement a partial prohibition by, for example, limiting the quantum of donations, and restricting the circumstances in which donations can be given (see section 4.3 below).

For the reasons in section 4.1 above:

The following are recommended controls, and some factors to be taken into account in implementing these controls.

(2) Consider the intention behind the donation

The intention behind the donation should always be considered.  If it could be intended to influence someone to act improperly, it should not be given.

Do not give a donation if it could reasonably be perceived to be corrupt.  There are two common perception tests:

(4) Consider the legal and regulatory environment

Before giving a donation, ensure that the law of the territory, and the regulations of the recipient, allow such a donation.

The purpose of this due diligence is to ascertain whether there is any connection between the political party or charity, and any business transactions, organisations or individuals with which the organisation is involved, or is likely to be involved.  As with all due diligence, the level of enquiry depends on the circumstances, and should be reasonable and proportionate.

(6) Be cautious about donations which could be intended to influence, or could reasonably be perceived to influence, a tender or other decision in favour of the organisation

(7) Decide whether the donation should be publicly disclosed

In some cases, the law requires donations to be disclosed on a public register or in the organisation’s annual accounts.  Even if not required, some organisations voluntarily disclose donations on the basis that transparency can help avoid the perception of corruption.

Require approval in advance of the donation from the compliance manager (and, if appropriate from an additional senior manager).  The amount which it may be permissible to give for a charitable or political donation could be significantly higher than the amount allowed for a gift to an individual under the organisation’s gifts policy.  Therefore, appropriate approval should be obtained in advance.  The reasons for the request and the approval should be documented, and the compliance manager must be satisfied that the donation is appropriate, and is not corrupt, and could not reasonably be perceived to be corrupt.

(9) Require donations given to be appropriately recorded

Donations given and received should be recorded in a register or other appropriate record.