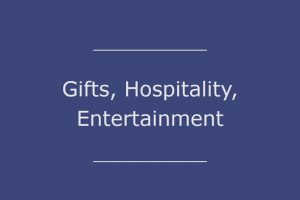 Separate sections deal with the corruption risk in relation to other categories of Benefit.  These other sections can be accessed on the following links:

See sample Benefits Register, in which the organisation can require benefits to be registered.

Note that this guidance is in relation to gifts, hospitality and entertainment which are being given or received in a business context, and is not applicable to any such benefits given entirely in a personal context (e.g. between family and friends).

A gift is something given voluntarily, without the expectation of anything in return.  It is normally associated with family or friends in circumstances where there is no business context, and is normally linked to some event (e.g. birthday, wedding).

A gift could be considered to be a bribe if it is given or received with the intention of influencing someone to act improperly, or as a reward for having acted improperly.

It is questionable whether a gift in the true sense of the word can be given in a business context.  Businesses do not normally undertake acts without the hope or expectation of something in return.  However, there can be cases where there is genuinely no expectation in return, or where this expectation is not corrupt, in that the gift may for example be given simply as a customary memento of an event (e.g. a signing ceremony for a major contract), or as a promotional reminder of the organisation’s name (e.g. a branded pen or desk ornament).  However, in a business context, there is a very fine line between a gift and bribery.  The giving and receiving of business gifts therefore requires extreme caution.

(1.2) What types of gift are not likely to be regarded as corrupt?

Gifts which are not likely to be regarded as corrupt include:

However, these relatively low value items could still be regarded as corrupt if the circumstances of the gift were inappropriate (e.g. giving a bottle of whiskey to a customs official who is responsible for clearing the organisation’s goods, or to a public official who issues work permits).

(1.3) What types of gift are more likely to be regarded as corrupt?

Gifts which are more likely to be regarded as corrupt include:

In some societies, gifts may be said to be customary under local tradition.  However, when the gift is to be given or received in a business context, further enquiry should determine whether such gifts are legal under local law, whether the apparent custom is in fact a genuine custom or simply a ruse for bribery/extortion, and whether it is understood within the particular society that, even if it is a genuine custom, the corruption risk may justify non-compliance with the custom.  For example:

Hospitality is primarily the provision of meals and refreshments.  The purpose of legitimate business hospitality is normally:

Hospitality could be considered to be a bribe if it is given or received with the intention of influencing someone to act improperly, or as a reward for having acted improperly.

Critics of the wide-spread international move to control business expenditure on hospitality from an anti-corruption perspective argue that these controls will result in business hospitality being abolished.  This is simply not true.  Firstly, hospitality can occur if there is no corrupt intent and no perception of corrupt intent.  Secondly, in the case of any doubt, it is always open to the employers of participants in the hospitality to pay the expenses of their own employees.  The primary reason for these controls is to prevent an organisation improperly influencing a person by paying for that person’s hospitality.

(2.2) What types of hospitality are not likely to be regarded as corrupt?

Hospitality which is not likely to be regarded as corrupt includes:

(2.3) What types of hospitality are more likely to be regarded as corrupt?

Hospitality which is more likely to be regarded as corrupt includes:

Entertainment is the provision of an external event which can pleasurably occupy a person.  For example, a sporting event, the theatre, a nightclub.

It is doubtful that entertainment can justifiably be regarded as a necessary and ancillary part of a business meeting or relationship.  This does not make it necessarily corrupt.  However, the risk of entertainment in a business context being perceived to be corrupt is higher than in relation to hospitality due to the lack of a necessary connection between the entertainment and the business (i.e. people need to eat, drink and sleep when on business – they do not need to be entertained).

Entertainment could be considered to be a bribe if it is given or received with the intention of influencing someone to act improperly, or as a reward for having acted improperly.

(3.2) What types of entertainment may sometimes be regarded as corrupt?

Entertainment which may sometimes be regarded as corrupt includes:

The more expensive or exclusive the event, the more likely it may be or be perceived to be corrupt.

(3.3) What types of entertainment are more likely to be regarded as corrupt?

Entertainment which is more likely to be regarded as corrupt includes:

To counter the risk of GHE being corrupt, or being perceived to be corrupt, an organisation may totally prohibit the offer or receipt of GHE in connection with the organisation’s business.  For example:

A partial prohibition of GHE is more common than a total prohibition.  There is nothing intrinsically wrong with an organisation or individual giving or receiving GHE, as long as these are not intended to be corrupt, and cannot be perceived to be corrupt.  GHE is regarded by many as a legitimate, important and enjoyable part of business and are essential in many cultures.

Some organisations may for example permit reasonable hospitality, but prohibit gifts and/or entertainment.

The following are recommended controls, and some factors to be taken into account in implementing these controls.

(2) Consider the intention behind the GHE

The intention behind the GHE should always be considered.  If it could be intended to influence someone to act improperly, it should not be offered or accepted.

Do not give GHE if it could reasonably be perceived to be corrupt.  There are two common perception tests:

(4) Consider the legal and regulatory environment

Before giving any GHE, ensure that the law of the territory, and the regulations of the recipient’s employer, allow such GHE to be received by that person.  Some countries for example prohibit any public officials from receiving GHE.  Some organisations prohibit their personnel from receiving GHE.

A weekly gift worth $25, or weekly meals, can soon accumulate to a large amount.  So a suitable periodic value limit (e.g. annual) can be imposed on GHE to the same recipient.

While both cash and non-cash assets can be bribes, a cash gift is more likely to be regarded as an attempt to influence someone than a gift which cannot easily be converted into cash.  It is therefore preferable to prohibit cash gifts.  However, some organisations work in locations where a small customary and non-corrupt cash gift may be necessary (see above for examples), in which case, suitable controls need to be imposed by the organisation.

(8) Be cautious about any GHE given to a person in a position to award contracts or approve permits, certificates or payments

(10) If gifts need to be given, then as far as possible give company branded gifts of limited re-sale value

A paperweight, pen, framed photograph, or a miniature of the company’s product, or something similar, with the company’s brand or logo on it can provide an effective memento without having any real re-sale value.  This is less likely to be regarded as corrupt than a product with a resale value.

(11) Consider requiring all gifts received to be donated to charity

Consider requiring all gifts received by the organisations’ personnel to be handed into a designated manager at the organisation, who will then donate them to a charity selected by the organisation which has no connection with the organisation’s business.  This can limit the risk of a manager being corruptly influenced by a gift, as the manager cannot retain it.  There can be exceptions to this rule, e.g. for low value company branded mementos which the personnel can be permitted to keep.

(12) Require GHE given or received to be appropriately recorded

Recording GHE in a Benefits Register can be an important control against potentially corrupt GHE for the following reasons:

Consider allowing deviations to the above rules in exceptional circumstances, but only if legal and approved by the compliance manager.  A GHE policy with stated financial limits cannot expect to cope with all potential circumstances.  There may be exceptional non-corrupt circumstances where a deviation to this policy is required.  In this case, approval should be sought for the deviation in advance from the compliance manager (and, if appropriate from an additional senior manager).  The reasons for the request and the approval should be documented, and the compliance manager must be satisfied that the GHE is appropriate, and is not corrupt, and could not reasonably be perceived to be corrupt.  Where a manager with the power to approve a deviation will be the giver or beneficiary, the manager should ensure that another senior manager approves the deviation.